At least this person called my comment dumb and didn't resort to calling ME dumb or blind, or ignorant, or clueless, or moronic, or petty-minded, etc. Also, it appears that I may have been accused of mansplaining when I was told that "instead of mansplaining how women should not be offended you might consider the real world context women live with every day to understand why some are", but this is a bit of an aside to my point here.

So, let this sink in for a moment. Any wonder why I would rather not deal with these people anymore? I've gotten to the point now that I'm sorry I ever did! Based on my personal encounters with such people, I cannot help but to think that they have the mental and emotional maturity of middle schoolers.


I went through hell in middle school I was verbally bullied ; I would rather not relive it! BTW, I've got a screenshot of the Facebook thread in question, the one about that song, the one on my FB wall, just for future reference. Posted by Unknown at PM Links to this post. Newer Posts Older Posts Home. Subscribe to: Posts Atom. Illustrations Hiding from Stinkbottom Troll cover art Front cover artwork, back cover artwork, and frontispiece for Recalibrating the Future by Herb Kauderer Diminuendo Press, July Altered Reality Magazine, June Fay Kindle Edition, May Defending the Manor cover art Bards and Sages Quarterly, April Fay Kindle Edition January First One to the Top Wins cover art Illustrations Apothecary Shop cover-art and shop signs interior illustrations Adventure Havens: Apothecaries and Alchemists, December, Friends no Matter the Differences……….

With each issue, we strive to introduce readers to exciting and entertaining voices in the horror, science fiction, and fantasy genres. Words: 39, Published: December 28, Words: 42, Published: September 30, First launched in January , The Bards and Sages Quarterly is a celebration of short speculative fiction. Each issue brings readers a vibrant collection of speculative works from both new and established writers. 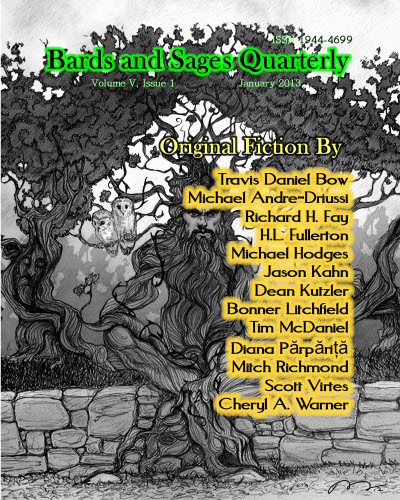 Our goal remains the same today as when we began: to create a showcase in which to introduce readers to amazing voices they might have otherwise missed. Words: 41, Published: July 1, Words: 59, Published: April 3, Words: 34, Published: January 1, Words: 27, Published: November 1, Volume Six of The Great Tome Series features eight original tales featuring historical and mythical magic-users.

From the lighthearted to the heart-pounding, this special double-length issue will delight short fiction fans. Words: 40, Published: March 17, Enjoy this collection of tales that provide a unique exploration of the legendary creature and its kin. Published: January 2, Celebrating our 9th year! Each issue offers readers a unique collection of original speculative fiction tales from both new and established writers.

An interview with the authors of War of the Worlds: Retaliation. Fiction by Andrew Knighton, A. Published: December 14, Volume Three of this collection features narratives revolving around the exploration of fantasy or alien locales in which the acts of exploration and adventure are central to the plot. This volume features over a dozen tales drawn from fantastic creatures found in folklore and urban legends.

Words: 43, Published: October 1, Since , the Bards and Sages Quarterly has brought fans of speculative fiction an amazing variety of short stories from both new and established authors in the horror, fantasy, and science fiction genres. Words: 58, Published: August 7, Though originally meant as a stand-alone anthology, the Bardic Tales and Sage Advice collection has evolved into an annual celebration of speculative fiction.

Our Eighth installment of the series features the winners of our annual charity writing competition and our Reader's Choice Awards poll. Words: 28, Words: 53, Published: June 7, This volume features eleven tales revolving around monsters, evil aliens, and otherworldly entities. Words: 33, Published: March 31, Since , the Bards and Sages Quarterly has brought fans of speculative fiction an amazing variety of short stories from both new and established authors.

In this Issue: Two friends wake up with something worse than a hangover in the days following the zombie apocalypse in "Breakfast". A lovestruck adventurer's little white lie has unintended consequences in "Utter Fail". A "hero" employs an unconventional tactic to rescue a rather annoying damsel in distress in "Tintinnabulation. Get A Copy. Kindle Edition , 56 pages. Published September 24th by Bards and Sages Publishing. More Details Original Title. Other Editions 1. Friend Reviews.


To see what your friends thought of this book, please sign up. Lists with This Book. This book is not yet featured on Listopia. Community Reviews.